This is our take on an absolutely classic stomach bitter. As a tribute bitter to J.G. Böker – the man behind the most revered bitter of all time Boker’s Bitter made famous in Jerry Thomas’ “Bartenders Guide” as Bogarts Bitter.

This is not a recreation of Boker’s/Bogart’s Bitters – but our version of a classic stomach bitter. It is deeply herbal and deeply bitter. It is an aromatic bitter but with a deeper more profoundly bitter expression than our Aromatic Bitter which is lighter and more playful.

We have researched stomach bitters intensively both how they used to be made in America – but also the different variants of European drinking bitters. What ingredient’s that were used and what the ingredient’s, supposedly, helped for. While some studies have re-found some of the values of the ingredients to be confirmed – these bitters are made for cocktails.

Used in cocktail it can give you so many things – be it in a sour or sweet cocktail. It is a very complex bitter with a lot of dark spices and herbs. A very distinct taste that’s full and somehow feels very old.

Claus Seiers thoughts on the J.G. Bökers Tribute Bitter:
“Oh my, this was the hardest for me to do – it is like attempting to recreate the holy grail of cocktails most likely you will fail – but I had to give this my best attempt and I am really happy I did. I think it was the second variation of bitter that I wanted to do – but I wanted to go about in a new way. I didn’t want to buy an old bottle and have it analysed – I wanted to make something original that had roots in cocktail history. I love the cocktails of the 18th century and I wanted to make a bitter that would be great to use in them. So I came up with the idea of making a tribute bitter and then base it on what ingredients that was used to help digestion and getting them mixed in a way that would bring depth and a deep richness when add’ed to a cocktail.” 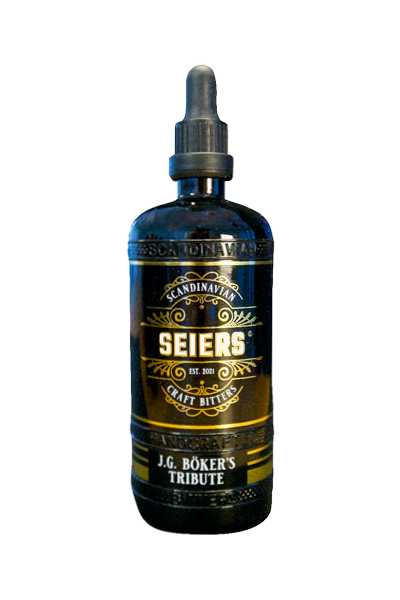